a few false starts...
False starts don't just happen in the Olympics. They are a part of the creative process as well.
They often occur when you're excited to jump into a project with a new technique, and it doesn't turn out quite like you expected. You may abandon the idea initially only to realize that it could work for another project. Or it may morph into something completely different and unexpected- a happy accident. (I love those oh so much!) Either way, we artists should recognize that those "oops" moments are often preceded by momentum, excitement and brave risk-taking. And that makes them worthy of our attention.

This was a night of false starts for me. I began a project for a musical friend with the idea of using pieces of broken CDs as part of a collage. I thought they'd snap into neat little pieces. Not so much. They splintered and the shimmery film peeled right off. I decided to let that project stew for a few days. Next I flipped through some recent photos and found one that was just perfect for a quote that's been stuck in my head all day. I tried to print the photo with text on top of it, but again, it did not turn out how I had in mind. (Darn lack of Photoshop.) So I decided to turn the photo into an art journal page that I could hand write the quote on, but it needed a painted galaxy-looking background. Layer one: boo. Layer two: too distracting. Layers three and four also fell short of my imaginings. I was about to give up on painting the background when I decided to try just one more color and a different technique. The iridescent bronze paint I never use was just begging to be splattered on the canvas with a toothbrush.
To make the paint more fluid, I watered it down a little in a cup I had used for another color. Turns out there was some blue residue left from before and it didn't blend with the iridescent stuff. Instead my splatters turned out aquamarine with a a lovely bronze ring around them. Things were starting to look very...spacey! Then I realized one of the flakes of shimmery CD film had gotten stuck to the canvas. 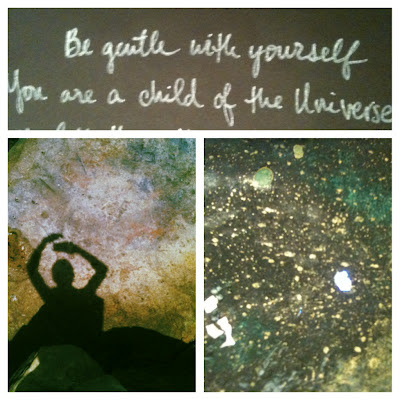 Hello STARS! I can't say I'm terribly attached to the end result (Something tells me I should play some more- that seems to be working for me), but I'm starting to recognize happy accidents when I see them.

When I look back on my whole process tonight: the discovery of the forgotten picture, the way the discarded pieces came together and how it all reflects the quote that's been echoing in my mind, I can't help but believe that the Universe is sending a gentle reminder. Trust in the process. Have faith that the false starts and moments of feeling lost will eventually lead me to my goal...in art and in life.

So while things are drying and awaiting completion, here's a sneaky peeky at what I made today..

Mila
I am a girl on the verge. I am an absolute beginner. Life is my art and my creative process. This is the evolution of my soul in pictures and paint and words.

I ramble on about: